Five Chanute High School students used their knowledge and leadership skills to earn medals while competing against 4,700 others at the FCCLA national leadership conference at Anaheim, California. 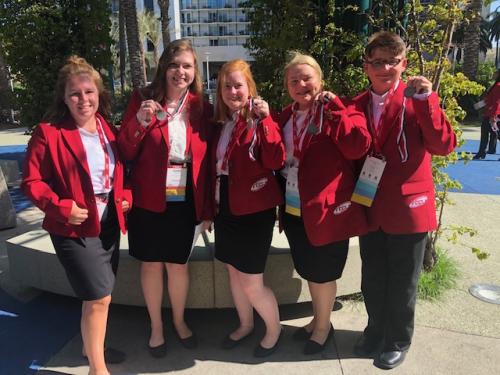 The students qualified for nationals by earning top marks at the district and state level in STAR events.

STAR Events are competitive categories where students are recognized for proficiency and achievement in chapter and individual projects, leadership skills, and career preparation.

Students choose the events they want to compete in, which vary from Early Childhood Education, Entrepreneurship, Sports Nutrition to Fashion Design, Job Interview, and Culinary Arts. Students keep records of all their planning for an event as well as a budget, document what took place, how it was marketed, and gauge its success. The notebooks are evaluated by judges and the students are graded on their prepared speeches and presentations to a panel of judges.

The goal of the program is to enhance students’ knowledge and skills through experience while equipping them with employable skills and industry insights needed to thrive in the 21st century.

In addition to the competition, the participants at the five-day conferences also attended leadership and program trainings, listened to national speakers, met youth leaders from across the nation, and explored college and career options.

Family, Career and Community Leaders of America (FCCLA) is a dynamic and effective national student organization that helps young men and women become leaders and address important personal, family, work, and societal issues through Family and Consumer Sciences education. There are more than 175,000 members in more than 5,300 chapters from 50 state associations, Puerto Rico, and the Virgin Islands.

This leadership experience is unique among youth organizations because its programs are planned and run by members. It’s the only career and technical in-school student organization with a central focus on careers that support families. Participation in national FCCLA programs and chapter activities helps members become strong leaders in their families, careers, and communities.

Hoesli learned that she had been nominated by her peers in December, which she described as a humbling experience. After nomination, the work began – compiling the accolades of the program and procuring letters of recommendation from administration and a student. The competitive branch of the program, the Family, Career and 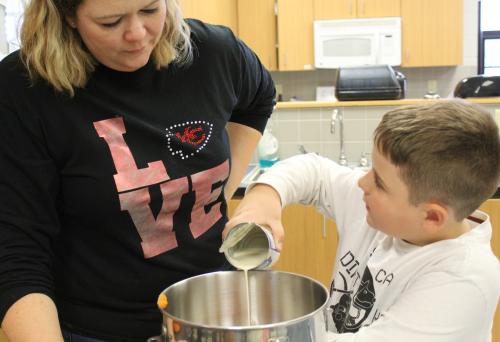 Community Leaders of America (FCCLA) club, has racked up a total of 46 medals in district, state and national competitions in her tenure. Two of her students recently placed 5th in the nation and CHS has brought home the district trophy for the last four years in a row. They were also awarded the State FCCLA Diamond membership in 2016 by increasing membership by 50 percent.

All of that information was sent to the selection committee, and in April Hoesli learned she was the recipient.

“I was so surprised and very humbled,” she said. “There are so many great FACS teachers, even just in southeast Kansas. I didn’t think I was worthy, but to know that they thought I was doing a good job and had done something for FACS and CTE (career and technical education) was just so awesome.”

Hoesli was so shocked about receiving the award that the students in her class were worried that something was wrong. She explained to the class what had transpired.

“They were so excited and super proud of me,” she said.

Hoesli has taught FACS exclusively for all 14 years of her career. This year will be her fifth at CHS. Last year was the inaugural year for the successful culinary arts program, serving for several functions such as the district retirement reception. Her culinary students also make take-and-bake meals every month that can be ordered by anyone in the community.

She feels that these hands-on experiences are important for her students because in addition to the cooking, they plan the menu, compile the grocery list, decorate the venue, serve the meal and of course, clean up after.

“They get to show what they have learned in the classroom,” she said. “I love to see the students that may not participate in sports or other extracurricular activities shine, and the look of accomplishment when their work is being praised by others.”

Hoesli said that enrollment for the culinary program has grown exponentially.

“It blew up; it is insane how popular it has become,” she said. “So many kids are interested and want to take the class and I want them to have the opportunity. It’s a lot of work and grocery shopping, but it’s so much fun.”

It was her own FACS teacher, Sharon Frankenbery at Fredonia High School, who inspired her to pursue her career path.