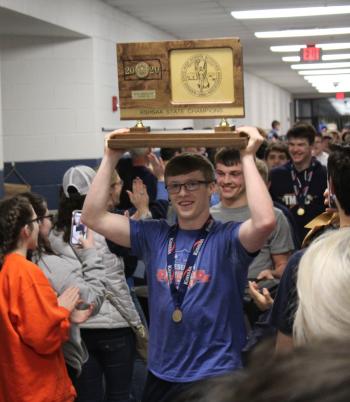 The award, which began at the end of the 1976-77 school year, was named after the long-time Pittsburg educator and coach.

“The best part of this award is it doesn't just reward the winners but it puts a value on how you finish in each sport so every single team was an integral cog on the way to winning the ultimate SEK team award,” said CHS athletic director Zack Murry.

This year the award was altered to account for 11 sports during the fall and winter seasons, which included the addition of girls’ wrestling. No sports were played during the spring due to the COVID-19 pandemic that forced the cancellation of those seasons by the Kansas State High School Activities Association.

With Chanute claiming the all-sports award, it ended a string of four straight championships by Pittsburg.

“Winning the Martin Rohde award is such a testament to the hard work that our athletes and coaches have put in throughout the year. We are extremely proud of our teams for performing the way that they did led by SEK Champion Wrestling and Football awards,” Murry said. “We are all proud of our Comets!”

Through the seven sports in the fall season, Pittsburg had a half-point lead over second-place Chanute and Independence. In fact, only 3.5 points separated the top four schools after the fall season.

Chanute eventually took over during the winter season by finishing in the top two in three of the four sports, including a championship in boys’ wrestling. The top three positions were decided by a total of just five points.

Claiming championships in football and boys’ wrestling, Chanute finished on top of the final standings with 49 points. Independence, which won volleyball and girls’ tennis, was second with 44.5 points. That was just a half point ahead of third-place Pittsburg at 44. The Purple Dragons won a title in girls’ golf.

Temperature: 91/76
Rain in the morning.
Saturday:

Temperature: 96/77
Humid throughout the day.
Sunday:

Temperature: 95/78
Humid and mostly cloudy throughout the day.
Monday:

Temperature: 96/73
Humid throughout the day.