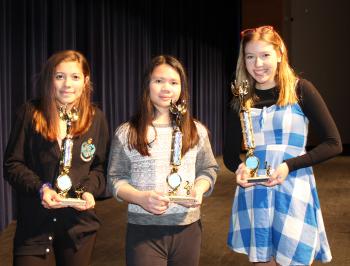 Poetry Out Loud proved to be a tough competition at Chanute High School on Dec. 19, with mere fractions separating the top contenders.

“The scores were very close,” said Stacy Henson, CHS English teacher. Three judges completed two rubrics for each contestant who recited two poems. The final check was for accuracy. The students couldn’t miss a word; add a word or an s at the end of a word without getting docked. 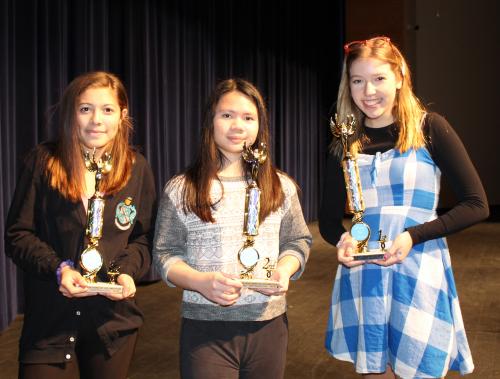 In the end, first prize went to senior Jillian Vogel for her recitation of Self-Help by Michael Ryan and I am Trying to Break Your Heart by Kevin Young. She moves on to the regional competition that will be held Feb. 1 at Chanute’s Memorial Auditorium.

Annyah Yap, a sophomore, took second with her recitation of If You Go to Bed Hungry by Angela Narciso Torres, and No, I Wasn’t Meant to Love and Be Loved by Mirza Asadullah Khan Ghalib. In third was Lexi Sierra, a junior, who recited I Am Offering this Poem by Jimmy Santiago Baca and In Praise of My Bed by Meredith Holmes

While many southeast Kansas schools have competed in Poetry Out Loud for years, this is the first year for CHS students.

“It was great,” Henson said. “I think we’re going to have kids come back and want to do it again.”

The good news for Yap and Sierra, both underclassmen, is that they can compete again next year, she added.

For some of the competitors, it was a victory to memorize and recite on stage in front of the judges. They learned that it takes practice, Henson said, and those who treated it like a performance did well.

“The last few days I had Annyah and Lexi in my room practicing,” said English teacher Isaac Robinson.

Drama teacher Chase Reed held a workshop after school for the class winners who wanted some coaching for the school competition. He helped them with their rhythm, voice, and pacing, Henson said.

The CHS English teachers learned about Poetry Out Loud last spring from retired language arts teacher Julie Aikins who is a regional organizer for the competition.

It is a competition, with local, regional and national contests, but it starts with teaching poetry and each student finding a poem they can connect with, Henson said. “Our end goal is that every child will find one poem (they can connect with), will understand and deliver it.”

In their classes in September, the students started by looking at song lyrics and analyzing advertisements. Then they perused the Poetry Out Loud website which contains more than 1,100 poems the students can use for the competition, as well as information about the poets and how to analyze poems.

Freshman Emilee Drake, who likes to read poetry, found her two favorites on the list. She recited Fire and Ice by Robert Frost and Trees by Joyce Kilmer at the school contest.

“With ‘Trees,’ it’s about admiring God and nature,” she said, but what she likes about it is how Kilmer used words to explain that.

While Alayna Inbody was reading poems, she found one that reflected her views on sunshine and a second one that took an entirely different approach.

“I really liked getting the theme and getting a different perspective on that theme,” Inbody said. Ah! Why Because the Dazzling Sun by Emily Bronte “is the 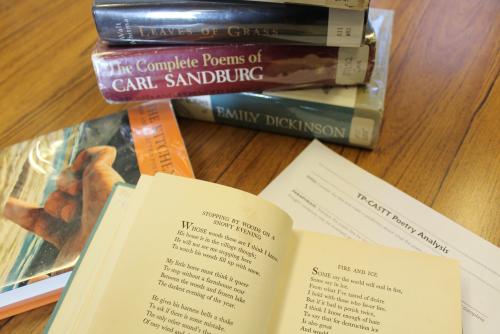 one I kind of related to the most,” because “it is anti-sun and a theme about sleep.” Her second selection by Frances Ellen Watkins Harper titled Let the Light Enter reveals a man’s need for sunlight as he nears the end of his life.

Jillian Vogel chose her selections for their emotion, rather than their words.

“I just like any sort of dramatic interpretation,” the senior said, and “this was another way to engage in that activity.”

In Self-Help, Michael Ryan’s poem is a satire where the narrator seems to be offering advice to a loved one.

“It’s a very sassy piece that I think I can convey pretty well sometimes,” she said.

Her second poem by Kevin Young is I am Trying to Break Your Heart.

Vogel admitted that “the money is a plus” to entering the competition.

Each school winner advances to regionals, which for the CHS champion means a trip across town to Chanute Memorial Auditorium on Feb. 1. The winner there advances to the state competition at Salina.

“At the state level is where the money starts,” Henson said.

More information about the Poetry Out Loud competition, the poems and their authors can be found at poetryoutloud.org.