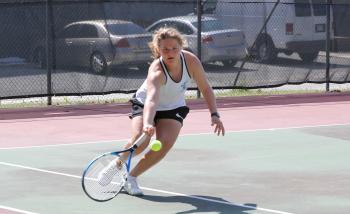 In regional competition this week, members of the CHS Girls Tennis team and Girls Golf teams overcame some expected and unexpected adversity to qualify for State 4A competition. 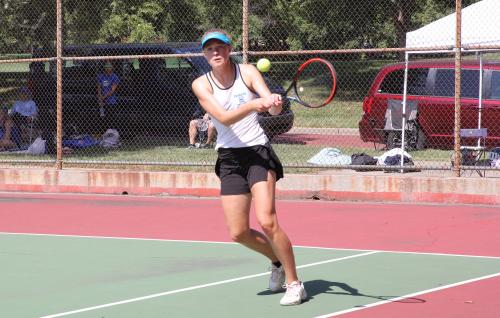 Qualifying to play tennis at the state tournament beginning Friday is Kori Babcock with her third place finish in singles competition, and the doubles team of Lily Falk and Filippa Kyed with their fifth place finish at regionals.

Babcock played “one of the most exciting matches of the day,” said Coach Mike DeLaTorre. After easily winning her first set against, Browyn O’Malley of Independence, the second was a battle with the girls going into a long tie-breaker that Browyn won 14-12. The third set was a Super tie-breaker where Babcock prevailed 10-8.

That pitted her against the #1 seed from Parsons, who won the match. Babcock moved on to take the third match by default over Jenna Eytcheson of Independence, who was injured in a prior match.

In doubles play, the Chanute team of Falk and Kyed started with an easy win over a Parsons team that set them up to 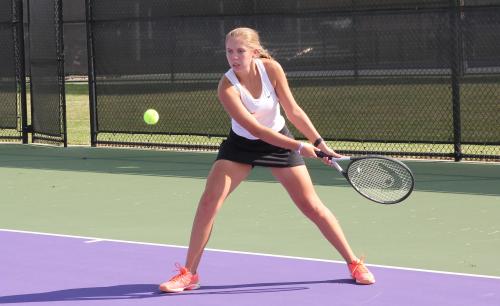 play the #1 doubles team from Parsons. They lost in a tough match, which unfortunately, DeLaTorre said, set them up against Chanute’s other doubles team with Haley Angleton and Caysia Crellin. Falk and Kyed took the match securing a trip to state; though as a fifth place seed, after falling to a doubles team from Fort Scott.

After some tough practice this week, the girls begin the two-day state competition at Winfield on Friday.

At the regional golf tournament at Fort Scott, the CHS girls had to overcome the weather, a tough course and some tournament jitters.

“I'm super proud of these girls. They all struggled at some point in their round, but ultimately settled in and finished strong,” said Coach Trevor Ewert. 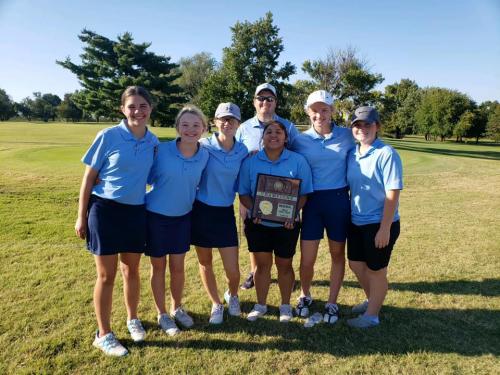 Their grit and determination eventually landed them a regional championship trophy, and a trip to Hesston to play in the state 4A Tournament.

The regional tournament was held at Fort Scott’s Woodland Hills, a course where the SEK girls’ teams have only played the original nine holes.

“It was cold, windy, and eye opening as the "new" side of the course has a lot of lateral hazards compared to courses we have played lately,” Ewert said. Also, “some of the girls who hadn't experienced a regional tournament before were thrown off a bit by being "announced" at their first hole, and having tee times instead of a shotgun start” they’re familiar with. “After some initial jitters, every girl seemed to have played better on their second nine holes as opposed to their first.”

When it was over, five members of the CHS team finished in the top 10, led by Jerlyn Kustanborter who finished in second with a 90, and followed by Timmen Goracke and Lia Gutierrez who tied for sixth, Janessa Varndell in eighth and Megan Kueser in ninth, winning 4A Regional as a team by 37 strokes.

“This year will be the first time KSHSAA has moved to a two-day state golf tournament, so it will be a bit of a learning experience for all. We are really looking forward to competing and finishing the season strong,” Ewert said.

Temperature: 84/64
Clear throughout the day.
Tuesday:

Temperature: 90/72
Clear throughout the day.
Thursday:

Temperature: 92/72
Mostly cloudy throughout the day.