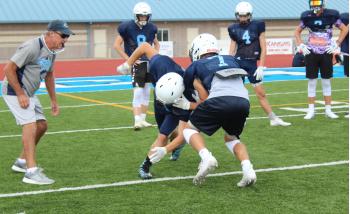 CHS football players and coaches are anticipating their first competitive test Friday night at a Jamboree to be held at Fredonia High School’s stadium, beginning at 6 p.m.

Football teams from Chanute, Fredonia and Parsons will face off against one another in a preseason competition that offers a more “game-like situation,” said CHS football coach Clete Frazell.

“I am very excited about the jamboree as it gives our athletes a controlled scrimmage versus another opponent. It will be a nice measuring stick for our team a week out from their first real game,” said CHS Athletic Director Zack Murry.

“Missouri has been doing this for years,” Frazell added. “This is the first year KSHSAA (Kansas State High School Activities Association) has allowed it in Kansas.”

There are limits on the number of plays per individual.

“The maximum number of plays that an individual can run is 36,” Frazell said of the varsity team. When the junior varsity teams play each other, they are limited to 40 plays against opponents.

At the annual soap scrimmage that was a tradition at CHS for “as long as I can remember,” Frazell said, the players were playing against the same kids they’d been practicing with for several weeks.

“It always gets to the point where you get tired of tackling each other and so it is nice to be able to do that to someone else,” Murry added.

“I think it’s just good for the kids. For us to play Parsons and Fredonia’s number ones is more competition for our first group,” Frazell said. It’s also an opportunity to see how some new rule changes will play out in a game situation.

At this point in the preseason, it’s a hard week of practice for the athletes.

“This (Jamboree) is the carrot hanging in front of them … pushing them to get better, knowing they have a real competition coming up on Friday.”

The site for the Jamboree is expected to rotate each year, so each school will get to host the event.

Temperature: 36/14
Clear throughout the day.
Monday:

Temperature: 28/5
Clear throughout the day.
Tuesday:

Temperature: 48/38
Light rain throughout the day.