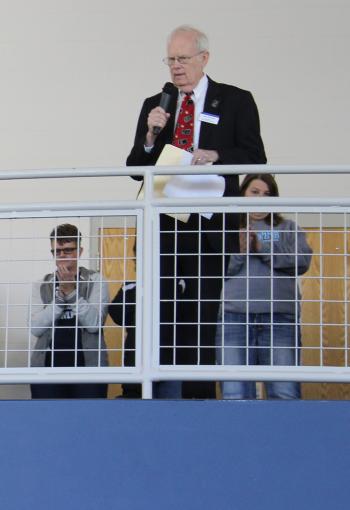 A member of the state Board of Education came to Chanute High School Friday morning to recognize the academic achievement taking place within its classrooms. The Challenge Award was presented in front of the students who took the tests and scored well, but a share of the recognition goes to the staff and administrators who work with the students and adopt policies and practices to encourage and motivate them to stick with it and do well in school. 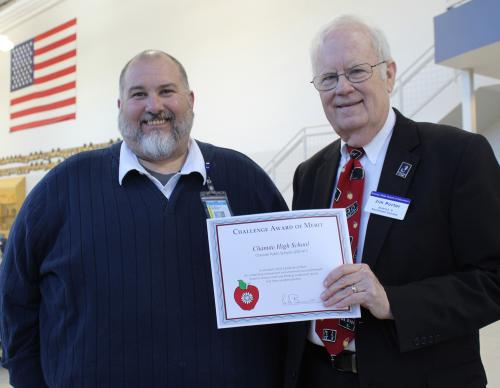 State Board of Education member, Jim Porter, told students that it’s relatively rare that this award is given to a high school, and that the majority are granted to elementary and middle schools.

To qualify for the award, the Confidence in Education Task Force evaluates the academic achievement of students and the school’s graduation rate, but it also takes into consideration the progress made in meeting the needs of all students.

Not all Kansas schools or school populations are equal.

The task force administers the Challenge Awards program to recognize Kansas schools that are making a notable difference in student achievement despite facing significant challenges in their school population. It recognizes academic improvement in students from one end of the spectrum to the other.

This award is for “high achievement despite the odds stacked against you,” said CHS Principal Brian Campbell.

“I’m proud of the staff and all their hard work,” he added. “I think we ask more of our staff here in Chanute and they continue to rise up” to the task.

The Confidence in Education Task Force is a non-profit corporation created in 1981 to promote cooperation among state education agencies, bring recognition to volunteers serving public education in Kansas, and to heighten awareness of the important role of public education in our society. Since 2002, it has presented more than 1600 awards to schools across the state.

Temperature: 83/63
Clear throughout the day.
Tuesday:

Temperature: 93/73
Clear throughout the day.